Outstanding goals in the opening 24 minutes from Chris Wood and Dwight McNeil earned Sean Dyche’s side only their second victory in 10 matches and gave them an important boost in their fight to stay in the Premier League.

They also hit the woodwork twice as Everton’s Goodison Park troubles continued. Ancelotti’s players have now lost seven times on their own territory, more than anyone bar West Brom, Fulham and Sheffield United. 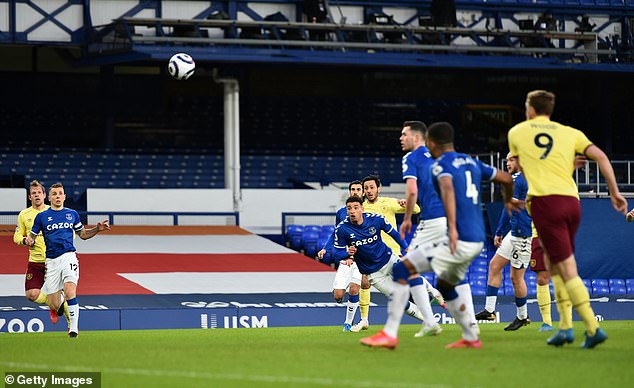 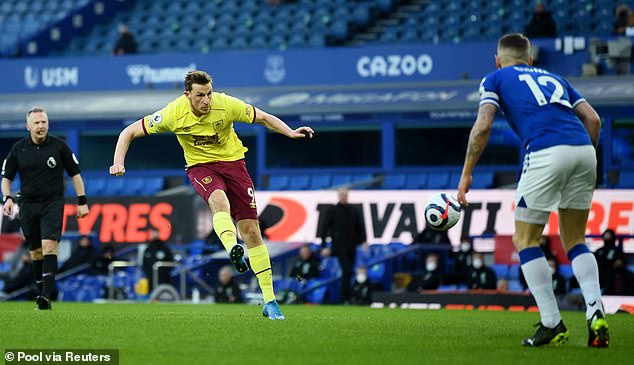 Wood put the visitors in front, punishing Tom Davies after he lost possession in midfield 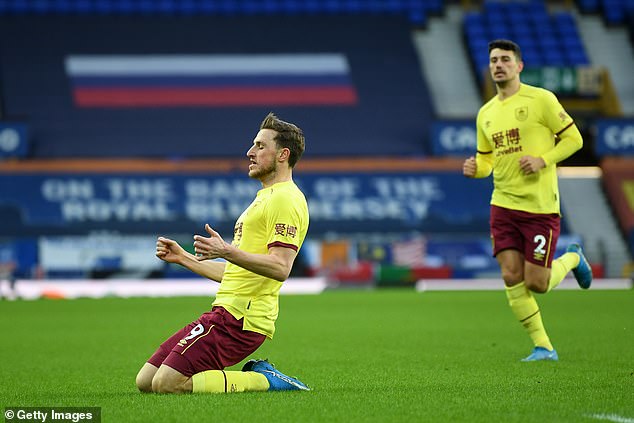 Dominic Calvert-Lewin did reduce arrears before half-time but a late onslaught never materialised. Burnley No 1 Nick Pope, who could now be promoted by England with Pickford’s problems, made one fantastic stop low down to keep out Andre Gomes but after that he was allowed to command his box with total authority.

Everton could point to missing their two chief creators, Gylfi Sigurdsson and James Rodriguez, and Tom Davies may have been fouled in the build-up to the opening goal but their misery of Merseyside runs deeper than that.

Pickford already looked frazzled before he dived to try and reach a shot by Johann Gudmundsson and hurt his side in the process, eventually replaced after 43 minutes with 21-year-old Joao Virginia making his Premier League debut.

All the quality came from the visitors defying their shot-shy reputation.

If Wood’s first was impressive, McNeil’s was an absolute cracker as he turned Allan and rifled home from 25 yards.

A delighted Dyche, who dedicated the result to his brother-in-law who was buried last week, said: ‘It was a well-earned win. The willingness came from our press. Every time we nicked it, we looked a threat.

‘It could have been more at half-time which I don’t say very often. They were top drawer finishes for our goals. Woody’s was a great strike and Dwight has a lot of quality.’

McNeil looks to have an England future if he adds goals to his game. This was only his second of the season but a pearler. 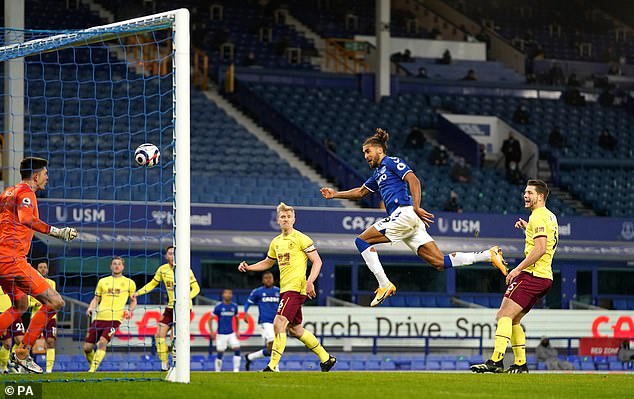 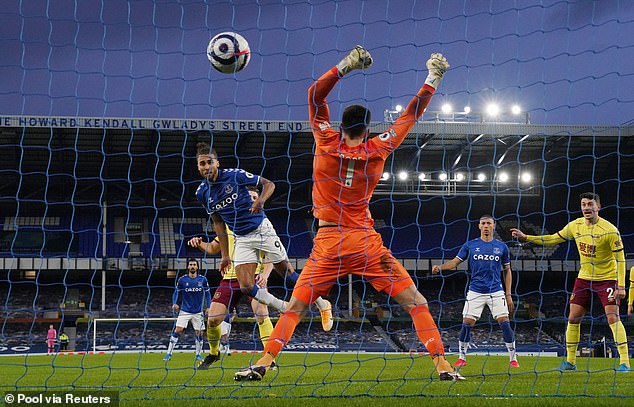 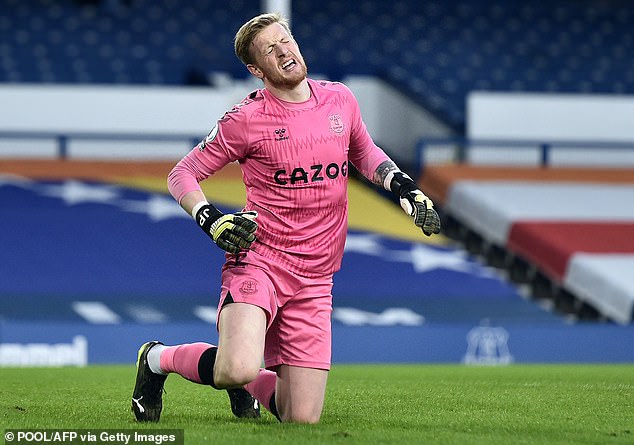 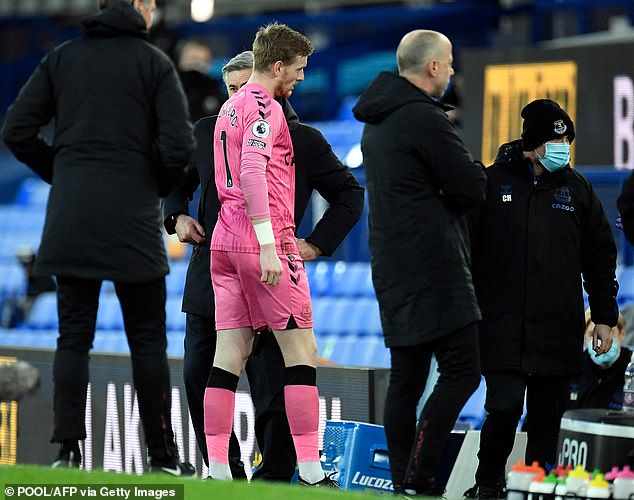 ‘I hadn’t scored like that in the Premier League but I do it in training and so the lads keep telling me to shoot more,’ he smiled.

Everton must have feared the worse after 14 minutes when Josh Brownhill was allowed to barge into Davies without sanction and McNeil broke down the left.

His cross cannoned off Michael Keane and fell to Wood who took one touch to control and second to guide into the corner with Pickford static.

The Clarets felt they should have had a penalty when the ball struck Mason Holgate’s arm at a corner but they didn’t need any sense of injustice to linger. 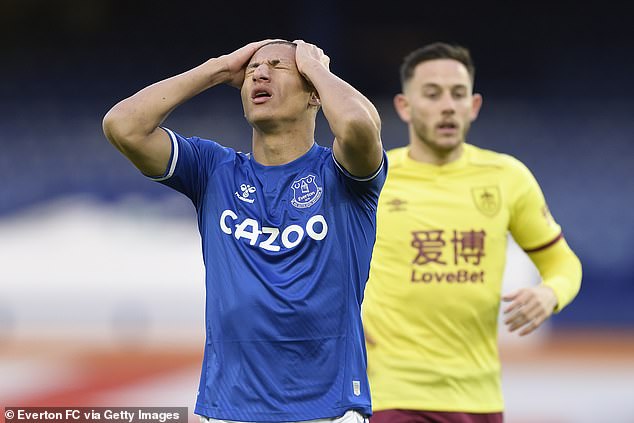 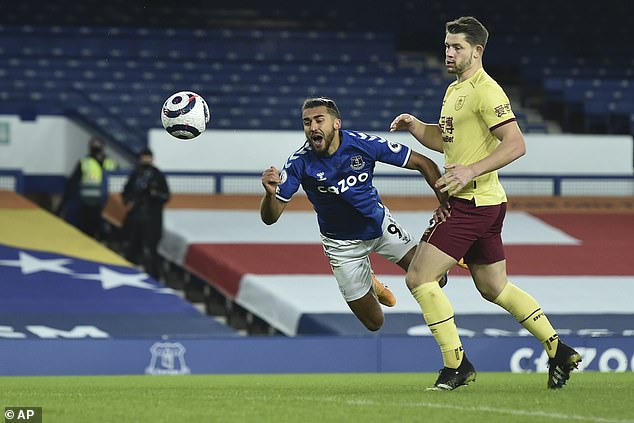 McNeil brilliantly created space from Matej Vydra’s pass and rifled his shot into the top left-hand corner. ‘I was shouting him to switch it,’ admitted Dyche afterwards. ‘He demands a lot of himself, sometimes too much. He was light and cheery when he came in after this one! He can only get better.’

It was nearly 3-0 as Burnley continued as brightly as their yellow shirts. McNeil slipped in Gudmundsson who hit the post with Pickford hurting himself in his attempted dive to the ball.

He temporarily struggled on and was still on the pitch when Calvert-Lewin powered a header from Alex Iwobi’s cross after 32 minutes for only his third goal in 14 games. 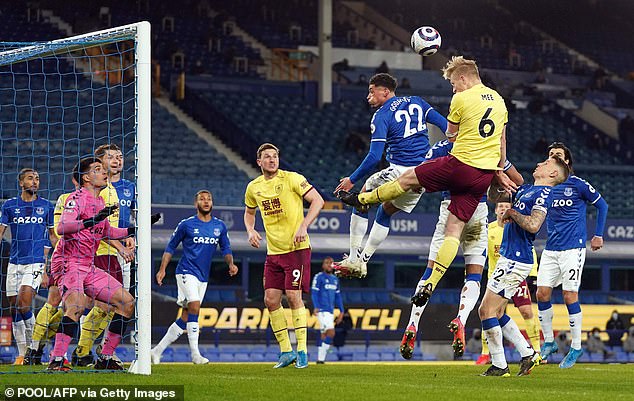 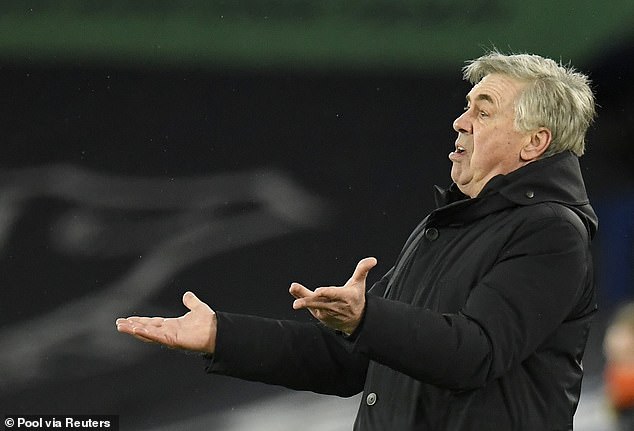 It was a far more open game than anyone could have guessed. Richarlison had a low shot saved by Pope. At the other end, Godfrey threw his body in the way to block a McNeil blast and James Tarkowski headed narrowly wide. Calvert-Lewin was equally close for Everton with another header.

Pickford’s evening ended shortly before half-time and Pope kept his side ahead at the start of the second period showing his agility to keep out Gomes.

Ancelotti threw on Joshua King to chase an equaliser but it was Burnley who tested Virginia on the break.

He was caught in no-man’s land and relieved Vydra missed his kick in front of goal. He then saved smartly from the same player. In between those chances, Mee headed against the top of the crossbar.

Seven of Everton’s eight defeats have been at Goodison. ‘We have to get it sorted out quickly,’ admitted Keane. They remain in sixth for the time being but Europe won’t happen unless they start winning at home. 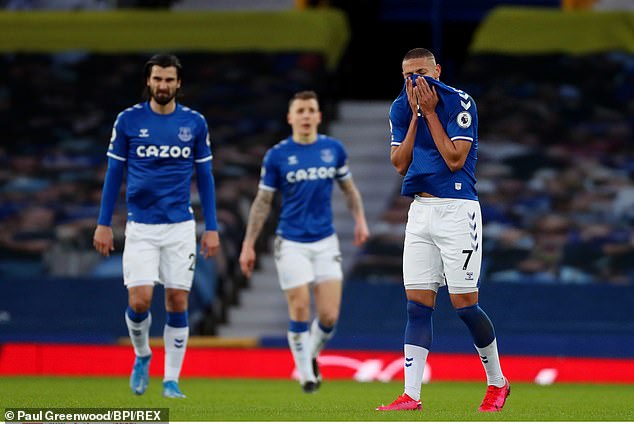 Re-live our live coverage of Everton 2-1 Burnley brought to you by Sportsmail’s OLLE LEWIS.