If this is what life without Chris Wilder looks like for Sheffield United, they might consider asking him back as Kelechi Iheanacho’s hat-trick sent the Blades to their heaviest defeat of the season in their first game without their era-defining manager.

Iheanacho’s first Leicester treble, along with another from Ayoze Perez and an own-goal from Ethan Ampadu, suggested Wilder’s departure by mutual consent is weighing heavily on this group of players.

With relegation now nearly inevitable, there was little caretaker-boss Paul Heckingbottom could do to reverse the trend of the 2020-21 campaign. Indeed, their second-half display was so poor that they were lucky to concede only five. 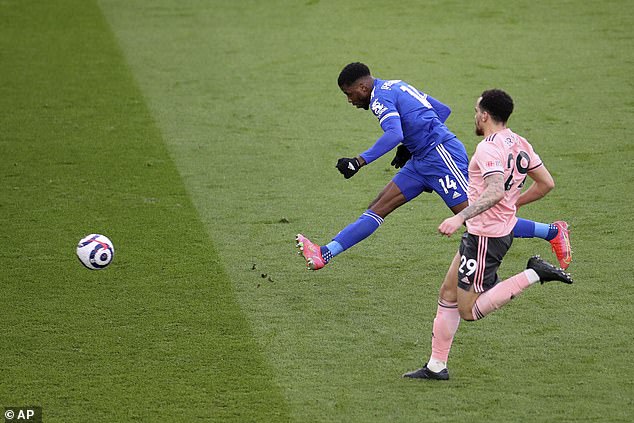 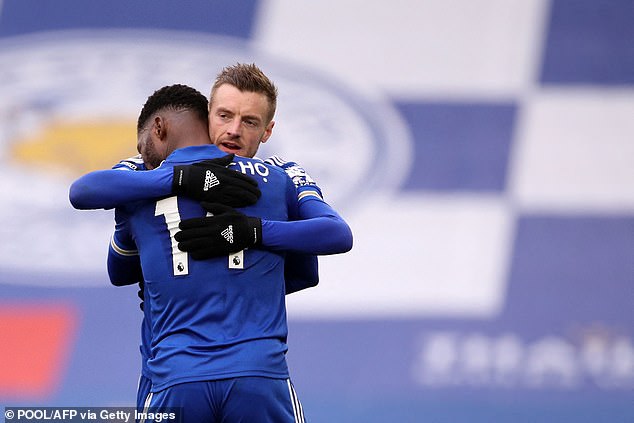 The Wilder years at Bramall Lane have ended, but Leicester will be hoping Brendan Rodgers can have just as great an impact during his time here. They have responded well to an alarming 3-1 defeat by Arsenal in their last home game to collect seven points from a possible nine, and strengthen their position in the top four. Best of all, Jamie Vardy seems to have rediscovered his mojo.

Though Vardy has only one goal in his last 15 games, he set up both Iheanacho’s goals and supplied the cross that Ampadu turned into his own net. The Sheffield Wednesday fan loves playing against United and with Iheanacho in this form, his goal return is suddenly not as important.

Iheanacho has had to bide his time here but he is producing when it counts, with five in his last three league games and six in six in all competitions. Even without injured attackers James Maddison and Harvey Barnes, Leicester are finding a way.

The Blades were missing their top scorer David McGoldrick were cautious throughout the first half, with the home side enjoying the possession and chances. 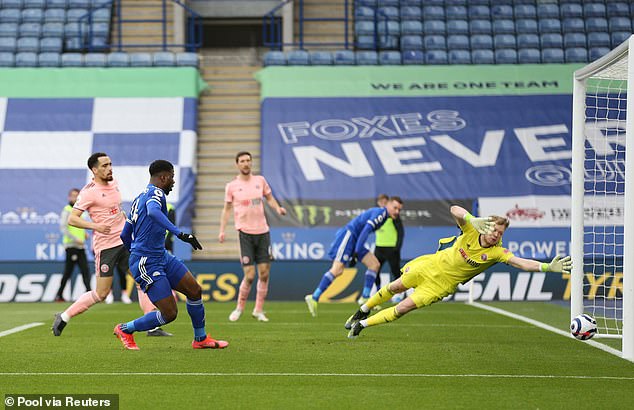 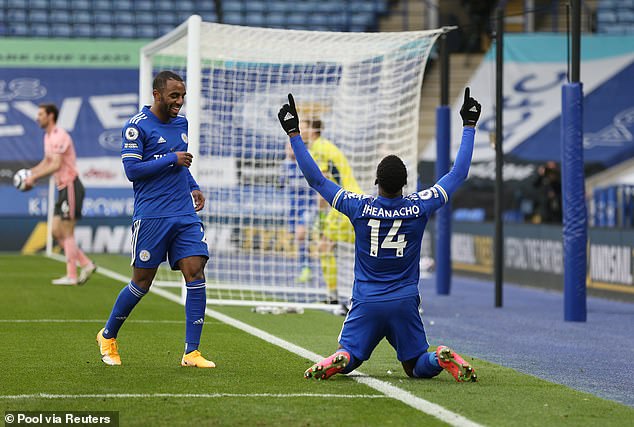 Vardy shot wide in the eighth minute after Wilfred Ndidi had regained the ball close to the visitors’ goal and soon afterwards Aaron Ramsdale kept the score level when he dived to his left to push Perez’s glancing header against the post.

In the 18th minute, Ramsdale intervened again by saving with his legs to deny Vardy, who had stolen the ball from a dawdling Kean Bryan. Though they were offering little in attack, United were well-organised and committed. When Youri Tielemans gathered the ball 25 yards from goal and wound up a ferocious drive, Oliver Norwood was there to make a vital block.

Leicester always had more quality on the ball, though, and they showed it to take the lead six minutes before half-time. Tielemans found Perez in space, and the Spaniard instantly slipped the ball forward for Vardy.

The centre-forward’s first-time cross was perfect for his partner Iheanacho, who steered Leicester ahead from close range. Iheanacho might have had a second in the closing moments of the half as he created room for the shot, only to fall on his backside as he lined up the strike.

‘Forward, forward, forward,’ barked Rodgers from the touchline as the half drew to a close, and his frustration grew early in the second period when United defender Chris Basham stopped what looked a certain goal.

Marc Albrighton, who had replaced Ricardo Pereira for the second half, crossed for Iheanacho to tee up Vardy. The effort looked bound for the roof of the net only for Basham to head it off the line brilliantly.

At the other end, a rare Blades attack saw Enda Stevens cross for Oliver Burke, who failed to apply the finishing.

Though Vardy looked much sharper than in recent weeks, the goal would not come. Iheanacho released him again on the hour mark; once again, the finish was too close to the impressive Ramsdale.

Luckily for Leicester, they have other players to do the job. In his first appearance since last month’s 3-1 win over Liverpool, Perez scored a delightful second.

After a United free-kick had been cleared by Wesley Fofana and Tielemans, Albrighton stole the ball from George Baldock on halfway and charged forward before finding Perez. The former Newcastle man took a touch before finding the bottom corner with a spectacular swerving effort that drifted inside the far post.

Leicester were comfortable and the third soon followed as Ndidi, an imperious presence in the centre, again won the ball back for his team. Tielemans collected it and found Vardy, whose pass was as accurate as it had been for the opening goal. As before, Iheanacho supplied an accurate finish and Leicester were home and dry.

There was still time for Iheanacho to complete his hat-trick and he did so in style with a powerful left-footer from 20 yards. The fifth followed quickly as Vardy sprinted into space once more and Ampadu turned the cross into his own net.

Scroll down to see how it all unfolded with Sportsmail’s live runner.