It took 70 minutes, but Liverpool finally got the goals their superiority deserved. Will this now prove a turning point in a blighted season?

Injured players are returning to the team; those displaced have been restored to their favoured positions. Suddenly, Liverpool look a different proposition. Nat Phillips and Ozan Kabak, two centre-halves, were outstanding in the heart of defence; while Fabinho made a huge difference playing once again in midfield. Diogo Jota, in his second week back since sustaining an injury in early December, breathed fresh life into the forward line. Mo Salah scored the first, Sadio Mane the second. It was just like old times.

For those preferring omens, after Barcelona’s elimination on Wednesday the Champions League quarter-final stage will now take place without either Lionel Messi or Cristiano Ronaldo, for the first time since 2005. We all know what happened in 2005 and which club went on to lift the trophy. With a team much inferior to this, too. 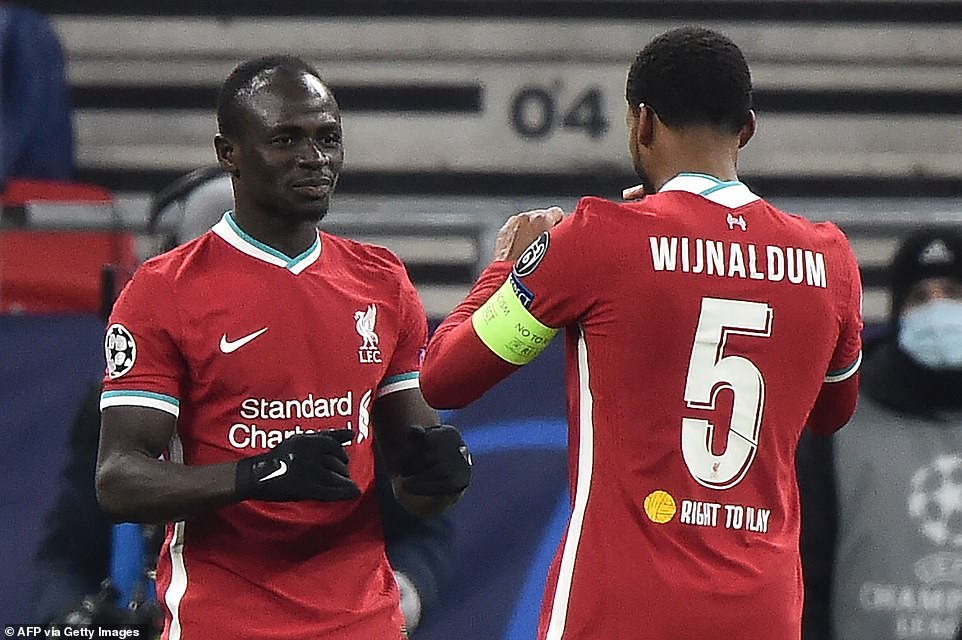 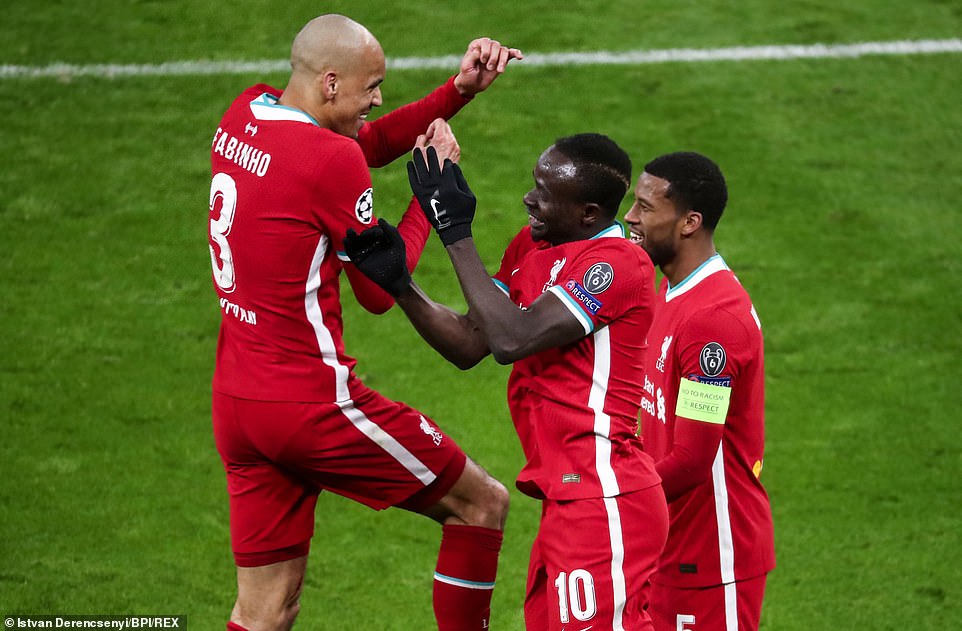 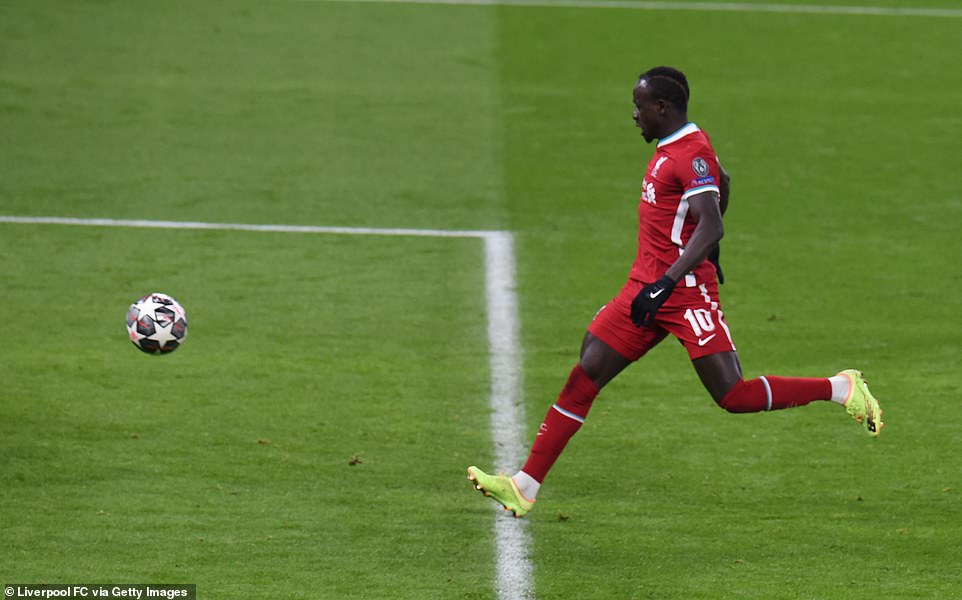 Wednesday night served as a reminder, then: there is still a very good Liverpool side here. There is still a team of immense potential, and nobody will want them in the draw on March 19. Kylian Mbappe and Erling Haaland may be Europe’s new guard, but little beats experience at this stage. Jurgen Klopp has players who know what it is to win, and lose, in the final of this competition. This could have been a problematic tie for them, but they closed it out with ease.

In Phillips and Kabak, too, Liverpool had a defensive pairing that coped impressively, with Fabinho ahead guarding. Might that be a better way forward than disrupting midfield to cover defensive absences? And does Jota give the forward triumvirate an edge it had lost with Roberto Firmino? It is not just the result that changes the narrative for Liverpool – and a home win, too, even if it was the surrogate home of Budapest – solutions to long-standing problems emerged here at last.

True, there were frustrations to begin with. Liverpool missed a huge amount of chances before their breakthrough came and should have had the game won before half-time, and with it the tie. They were superior throughout, and Leipzig very disappointing. Alisson made one save in the first-half and in the 66th minute substitute Alexander Sorloth hit the bar with a header from a Hwang Hee-chan cross. Had either of those chances gone in, it would have been a different game, of course. Yet Leipzig needed two goals at least, more likely three to progress. They should have had more than just two opportunities over an hour in.

As it was, Liverpool put the game to bed in the space of four minutes. That the first goal involved all three members of their forward line must have been particularly pleasing for Klopp. Much has been made of Liverpool’s defensive frailty with so many injuries – but equally, the forwards have been off-colour of late. 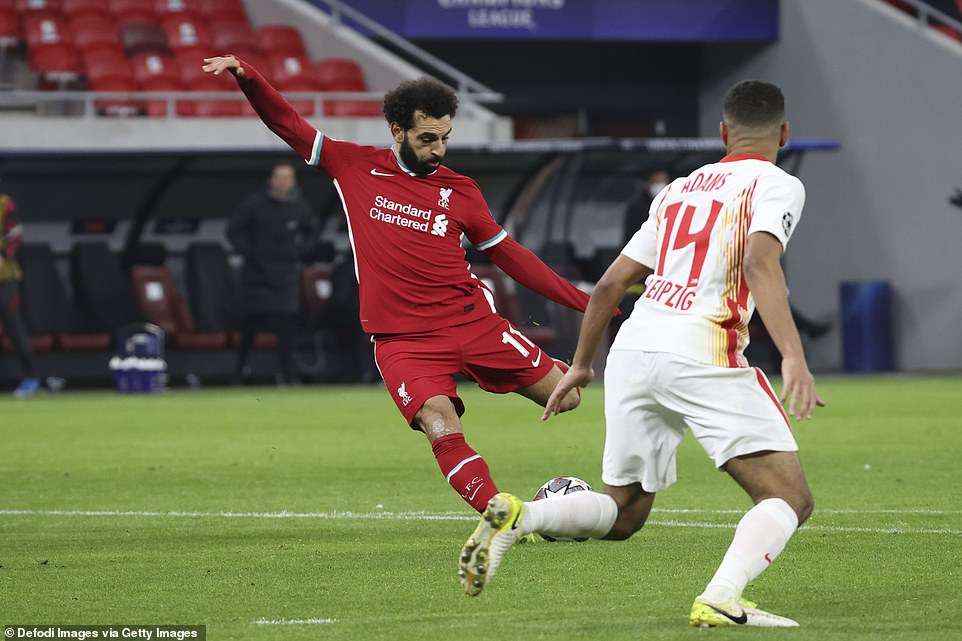 Just four minutes earlier, Mohamed Salah broke the deadlock on the night with an excellent drive into the bottom corner 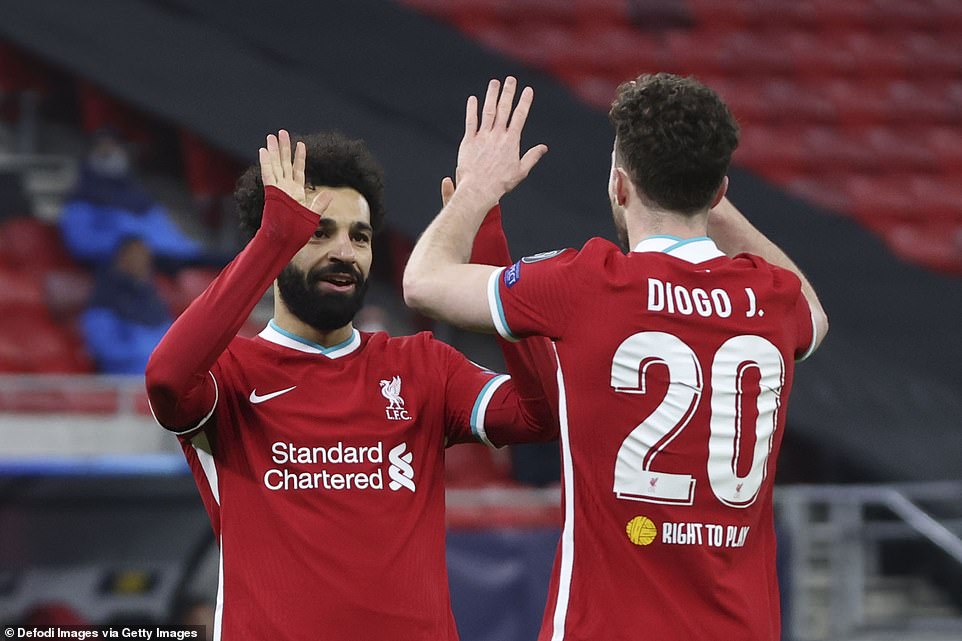 Salah had been assisted by Diogo Jota, with the Reds finally scoring having wasted a number of chances prior to the goal 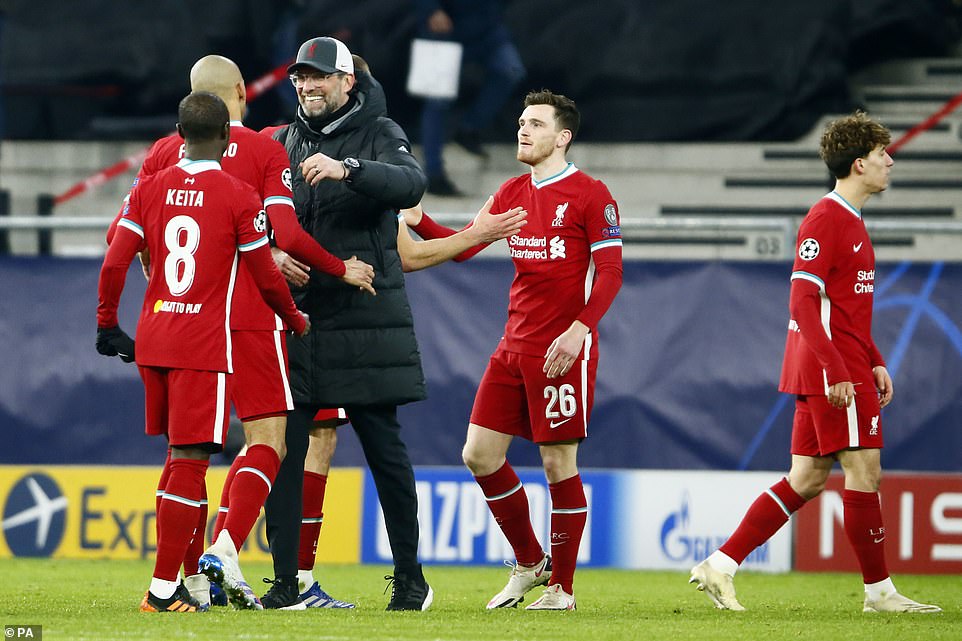 That changed when Sadio Mane fed Jota, after a ball through the middle from Thiago Alcantara. Jota sped on and cut the ball square to Salah. He drove into the box at which time everyone knew what was coming next. Everyone bar Dayot Upamecano, that is. He seemed genuinely surprised that Salah cut inside onto his left, and was no doubt equally shocked when a second later the ball was nestling low in the corner of Peter Gulacsi’s net. The goalkeeper didn’t deserve that. He’d had a good game.

Leipzig deserved it, though. And the second they conceded, four minutes later. Klopp had introduced Naby Keita and Divock Origi from the substitutes’ bench and they combined to give Liverpool a commanding 4-0 aggregate lead. Keita played Origi in down the right and his quick cross caught out everyone but Mane, who required a single touch to put it in the net. Job done.

Yet the signs were there from early. Chasing a two goal deficit, the expectation was that Leipzig would start quickly, as they did in the final group stage game against Manchester United. What to make, then, of an opening three minutes that saw Jota almost take advantage of defensive sluggishness, a desperately poor clearing header from Upamecano, and Thiago with a splendid opportunity in front of goal? Still a little short of confidence, perhaps, he tried to play Salah in instead, and the moment passed. 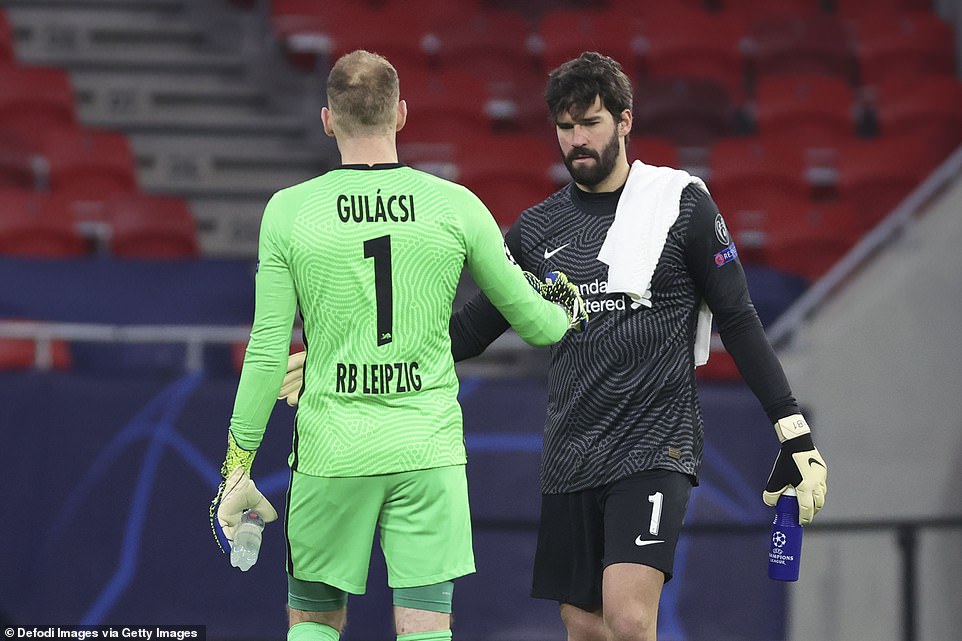 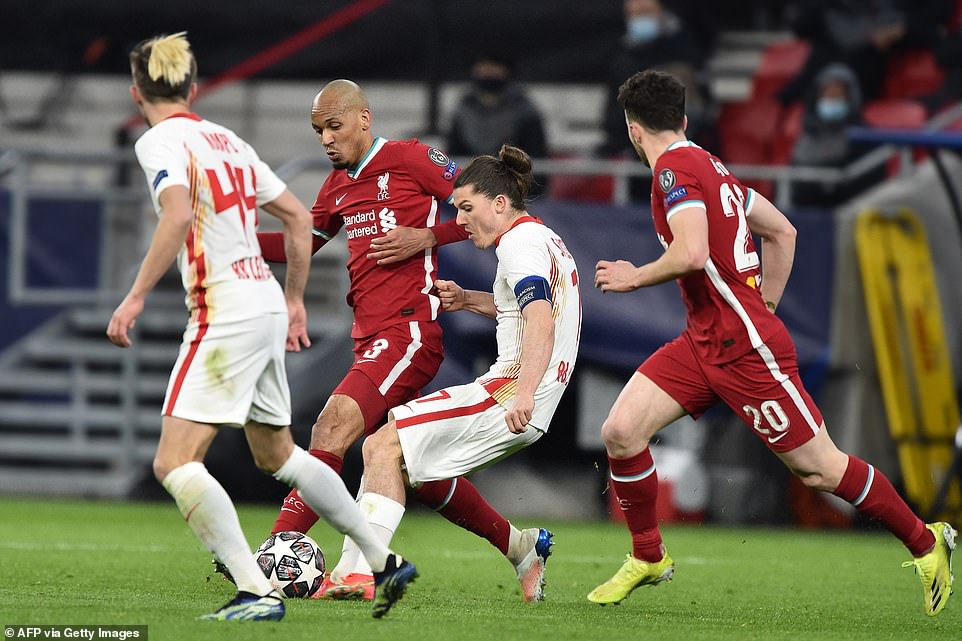 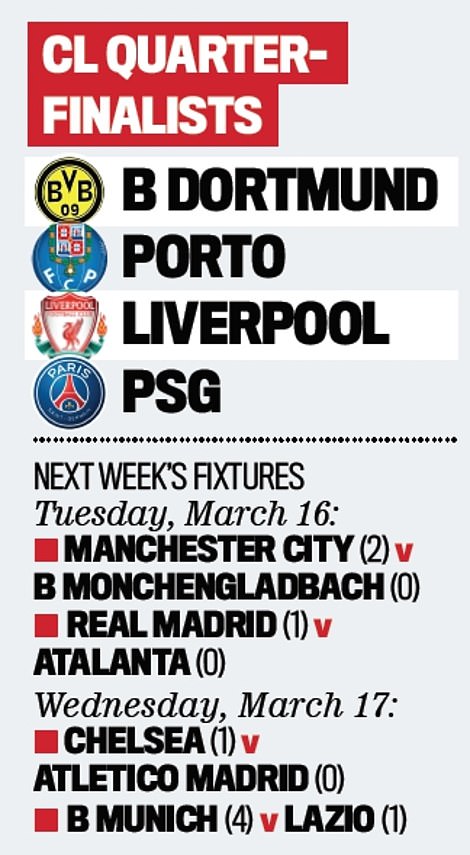 In the sixth minute, Georginio Wijnaldum, captaining the side in Jordan Henderson’s absence, played a sweet little chip that put Mane in at the far post, but he shot over. Soon after, a lovely inswinging corner from Trent Alexander-Arnold picked out Jota, whose header was excellently saved by Leipzig goalkeeper Gulacsi – the first of many on the night.

He was in action again after 24 minutes when a Leipzig corner came to nothing and was cleared, acrobatically, on the half volley by Thiago.

The ball dropped to Salah, in behind the Leipzig defence, only Gulacsi to beat. The finish was disappointing, straight at the goalkeeper, who was swift off his line, the loose ball falling to Mane who headed it straight into the ground.

This was Liverpool’s most assured display since the first leg and Leipzig were at full stretch to keep them out. In the 29th minute, Mane fed Alexander-Arnold who cut the ball back into Salah’s area, but Upamecano got there first, kicking the ball high over the Leipzig bar, a brave and quick-thinking clearance, and one of the few times in this tie when he has afforded a glimpse of talent that has come at such a price for Bayern Munich.

Not so just before half-time when in an effort to clear up from Salah, Upamecano ran the ball straight into the path of Jota, who shot into the side-netting – the biggest miss of the half.

And it wasn’t just Upamecano looking vulnerable. Minutes earlier, Jota had hassled his partner, Nordi Mukiele, off the ball before shooting straight at Gulacsi. 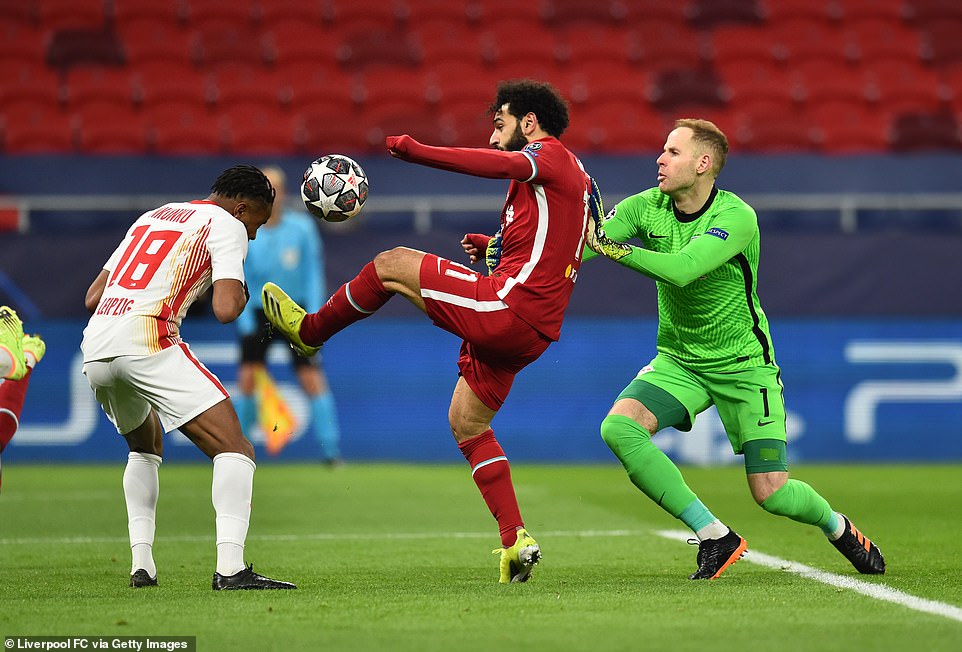 Liverpool wasted a number of chances in the first half, with Gulacsi (right) managing to keep the Reds at bay for long periods 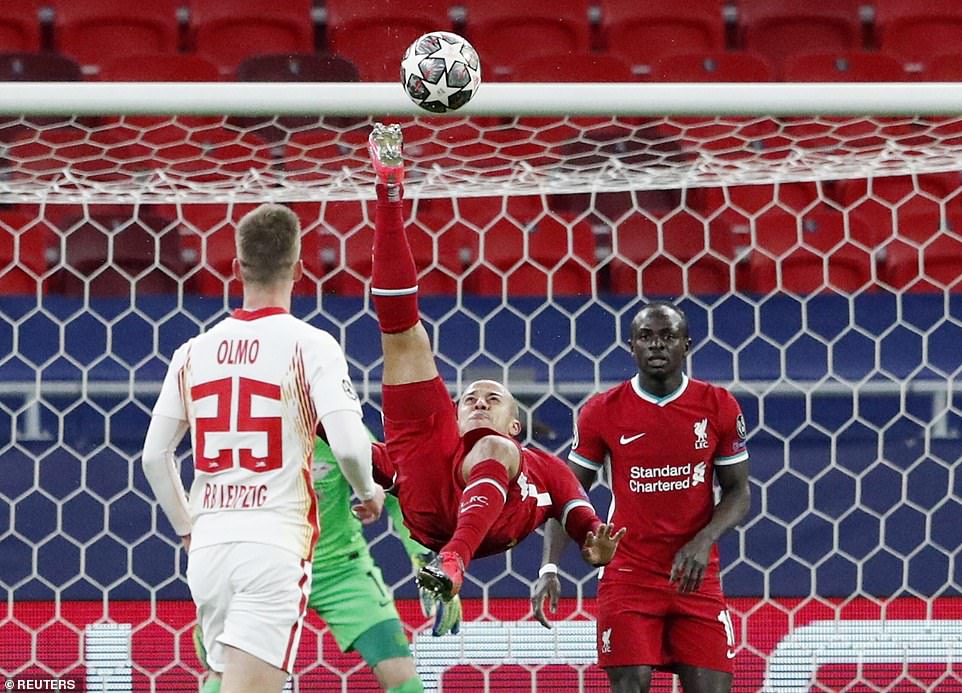 Thiago Alcantara attempts an overhead kick on goal for the Reds during the first period,as team-mate Mane looks on 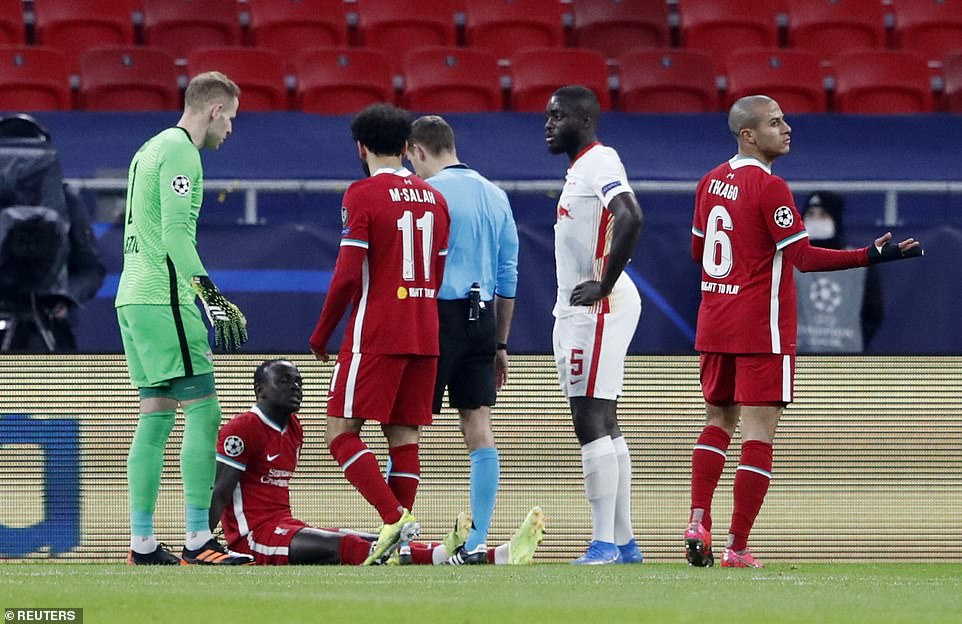 For a team supposedly playing catch-up, Leipzig were underwhelming. Julian Nagelsmann, their coach obviously considered Alexander-Arnold Liverpool’s soft spot, and targeted him remorselessly through Christopher Nkunku on the left. Unfortunately, Nkunku was predictable, a couple of touches and cutting inside, with little variety. The one time he made it count, after ten minutes, Leipzig forged their best opportunity of the first-half.

Nkunku whipped it in, Yussuf Poulsen held it up and Dani Olmo’s shot was part-saved part-charged down by Alisson – a vital intervention. And knowing Liverpool’s recent vulnerability had that gone in, who knows? Klopp does not share the general disdain for Leipzig’s performances across two legs. He points to the Bundesliga table, and a team two points behind the mighty Bayern Munich.

So this, possibly, is where Liverpool’s story changes: with solutions, with goals and with a place in Europe’s last eight. That’s deeper than they went a year ago. Finally, things are looking up.

RE-LIVE ALL THE ACTION AS IT HAPPENED…

Liverpool take on RB Leipzig in their Champions League last-16 tie hoping to secure a result that will see them progress to the quarter-finals.

The Reds lead 2-0 after winning the first leg at the Puskas Arena in Budapest, which is also the venue for their ‘home  leg’ as they they look to overturn a downward spiral of results which have seen them lose six of their previous eight games.

Cristiano Ronaldo and Lionel Messi: Are their days of dominating the Champions League over?