Wolfsburg defender Paulo Otavio handed FOUR-GAME ban for blatant two-footed red-card lunge on Hoffenheim’s Mu’nas Dabbur, who had an empty net in front of him before being scythed down outside the box

By Sam Mcevoy For Mailonline

Wolfsburg defender Paulo Otavio has been handed a four-game ban for his cynical two-footed scissor challenge on Mu’nas Dabbur, which earned him a straight red card in his side’s 2-1 defeat by Hoffenheim.

With Wolfsburg trailing in stoppage time, goalkeeper Koen Casteels was given the green light to go up for one final corner which quickly backfired after the hosts quickly countered through Dabbur.

Having carried the ball from his own half and with just an empty net in front of him, Israeli striker Dabbur dribbled towards goal before being wiped out from behind by Otavio, in what was one of the most blatant fouls in professional football history. 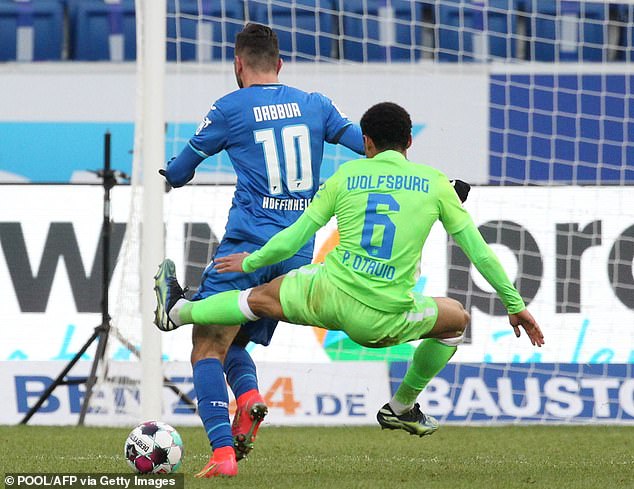 Otavio, who had picked up a yellow card just minutes before, made a lung-busting run to catch up with Dabbur before deciding to wipe out his opponent in a last-ditch effort to stop Hoffenheim from getting a third. Referee Markus Schmidt was left with no other option than to correctly brandish a straight red.

However, it appears his goal-saving challenge may have done a lot more harm than good.

While he succeeded in stopping Hoffenheim from getting a third, Otavio will play not part in Wolfsburg’s next four games after being severely punished for his calculated actions by the German FA.

Wolfsburg confirmed the news on their social media channels. 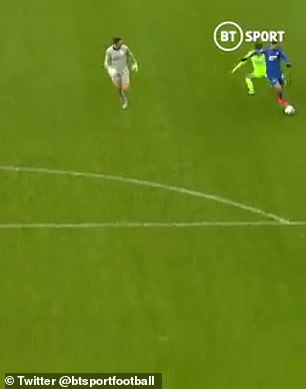 With an open net ahead of him, Dabbur was cynically taken out by Otavio in the dying seconds 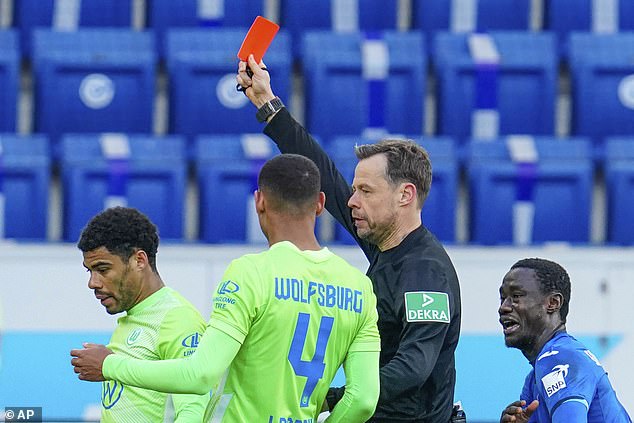 The Bundesliga club tweeted: ‘Four game suspension… After his red card in the game at the @tsghoffenheim Paulo Otavio will be missing until mid-April.

‘The judgment was given by the sports court of @DFB on Tuesday afternoon.’

Otavio has been an ever-present figure in Wolfsburg’s backline this season, featuring in all but six of the club’s 24 league games which has seen them push for Champions League football next season with the side currently in third.

Otavio will now miss key games against Schalke, Werder Bremen, Cologne and Frankfurt – with the latter only two points behind Wolfsburg in the table.

How Jude Bellingham has been given his chance to shine in...